You are here: Home / News / “Where there is friendship, there is hope” – Jewish / Muslim Relations 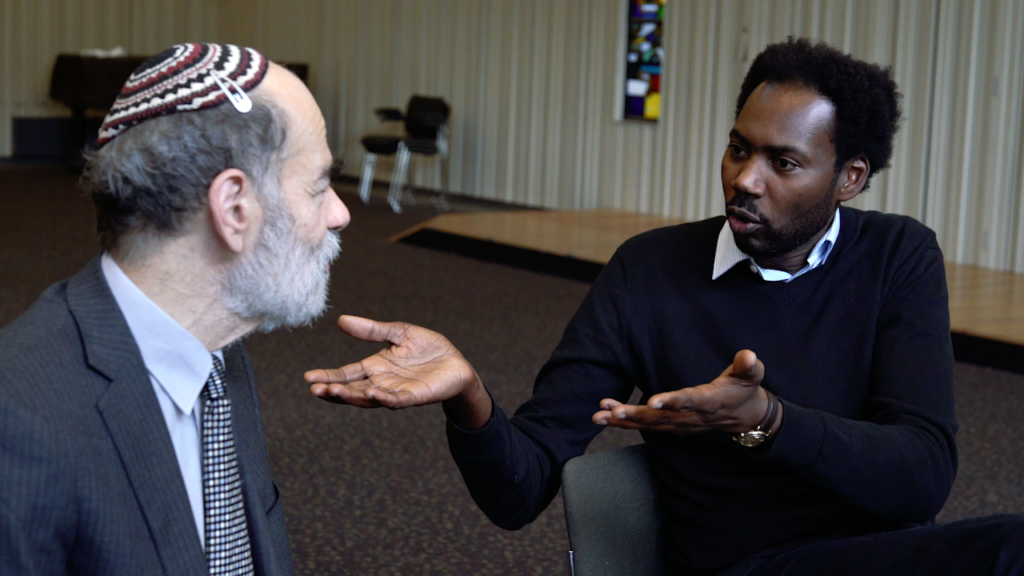 Award winning speakers – Imam Mamadou Bocoum and Rabbi Jonathan Wittenberg – spoke at ‘Shalom / Salaam’ on Tuesday evening at an Interfaith event which we co-hosted with Muslims Against Antisemitsim (MAAS). It was also attended by the Mayor of Elmbridge, Mary Sheldon.

The two speakers won the 2017 ‘No2H8 Crime’ awards for intercultural dialogue for their work speaking to audiences over the past few years about the importance of standing together, tackling hate and observing our religious traditions within a context of understanding and inclusivity for each other.

“One day you will do the same for others”

Imam Bocoum told of his shock and surprise when encountering casual antisemitism when he first came to the UK.  As a result of this he went on to study Judaism and its relationship with Islam.

Each talked about the strong links between the two religions.  Imam Bocoum stressed the importance of learning about the history of both religions and in particular how they coexisted together largely peacefully between the 7th and 15th centuries.  Speaking about his work in the Prison Service he explained that he focusses on this historical coexistence rather than discussing the Koran when working with convicted extremists.

Discussing the current climate in the UK, Rabbi Wittenberg warned against Jews and Muslims competing for victimhood; “If we only relate to each other as victims in fear and anxiety we won’t open our hearts and won’t open our minds” he said.  Rather the two communities should work to become allies based on a shared bond of textual traditions and shared values such as belief in one God, charity and community.

Two communities seen together in the public square

When asked about grounds for hope, both had positive messages.  Imam Bocoum referred to the recent case of the Muslim woman who defended a Jewish family from abuse on the London Underground, saying that such cases highlight that the situation is not as bleak as some may think.  Rabbi Wittenberg stressed the need for the two communities to be seen together in the public square: “it’s important to be seen together, to act together to counter populist rhetoric with equally compelling rhetoric about partnership and togetherness”.

“Where there is true friendship there is real hope”

Speaking after the event Rabbi René said “We are very privileged to have hosted these two wonderful speakers this evening. It was a thought provoking, challenging but above all optimistic conversation and these two demonstrated that where there is true friendship such as this there is real hope”.

Rabbi Jonathan Wittenberg is Senior Rabbi for New North London Synagogue and the Senior Rabbi of Masorti Judaism in the UK. Dr Imam Mamadou Bocoum is a Chaplain for Her Majesty’s Prison service and Interfaith Advisor to Register our Marriage (ROM).

Muslims Against Antisemitism is a not for profit organisation that is made up of British Muslims who believe that antisemitism, in all of its guises, needs to be challenged.