You are here: Home / Archives for News

On Saturday 13th July we celebrated ten years since our Community Mosaic Project.  At a special Shabbat service, the Project Manager, Sandra Webber, told the story of this project. 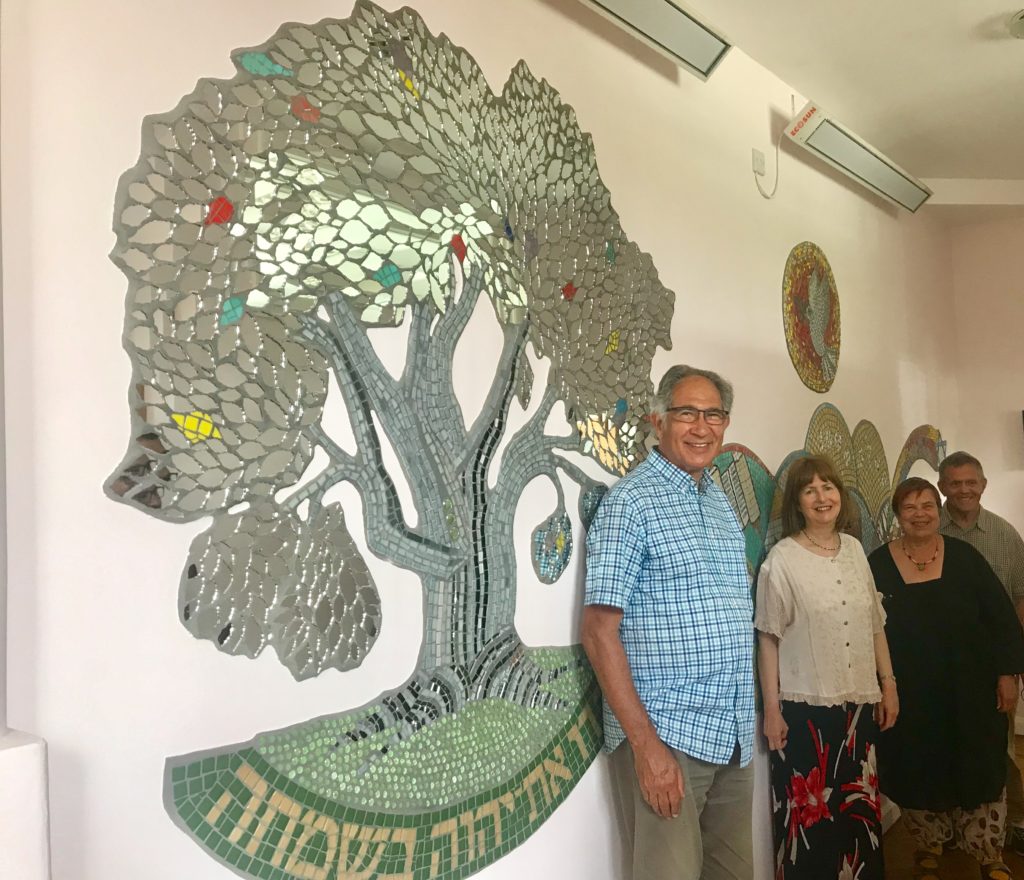 Sandra and other members of the original community mosaic project

Sandra described how an extension to the building in 2008 resulted in a large blank wall in the reception area which was crying out for a piece of artwork.  A community mosaic project was proposed and initiated.

A local artist was appointed as the design lead and ideas for the artwork were submitted by members of the community. Sandra explained how the artist made it clear that the design process was “not a democracy” but that the community’s ideas would be incorporated into the final design. Sandra showed us the original submission which was the inspiration for the Tree of Life in the mosaic: 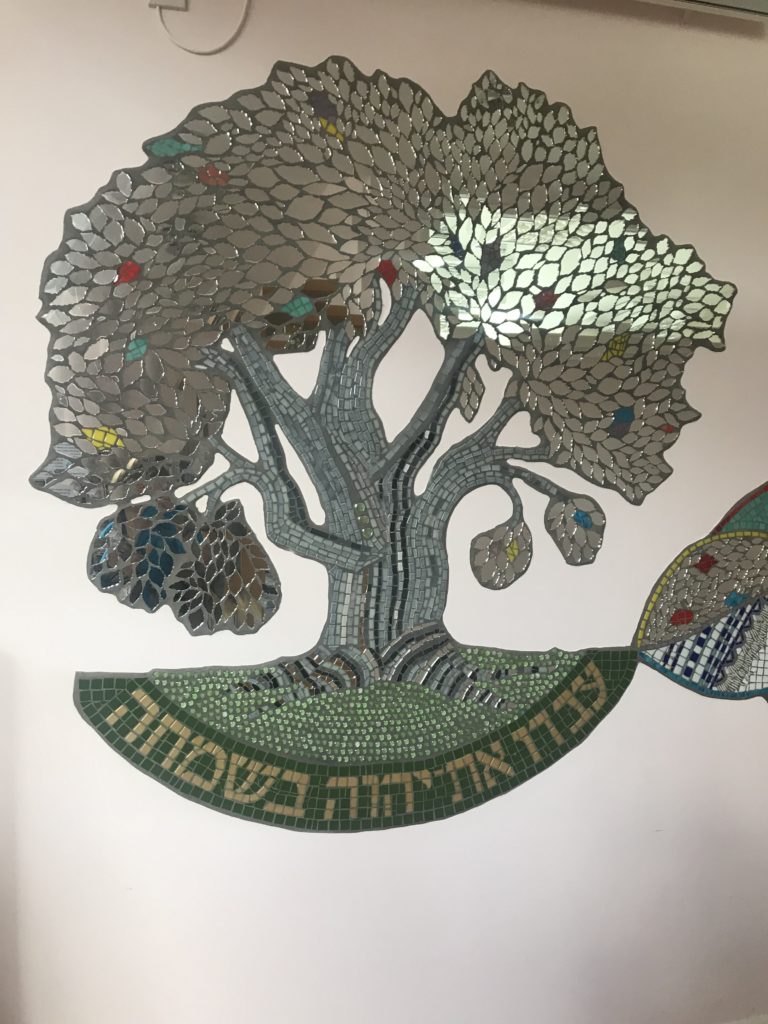 Tree of Life, made from 613 mirror tiles representing the 613 commandments

She also showed some artwork from a GCSE art student, now a student at Berlin Art School, which inspired the inclusion of the Pomegranate and the Dove: 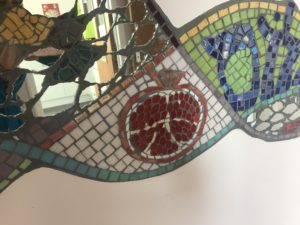 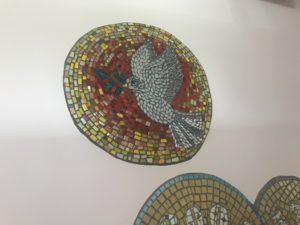 She explained how the four hands were templates of the hands of a child, a teenager, an adult and a Senior Citizen, representing four generations of our community: 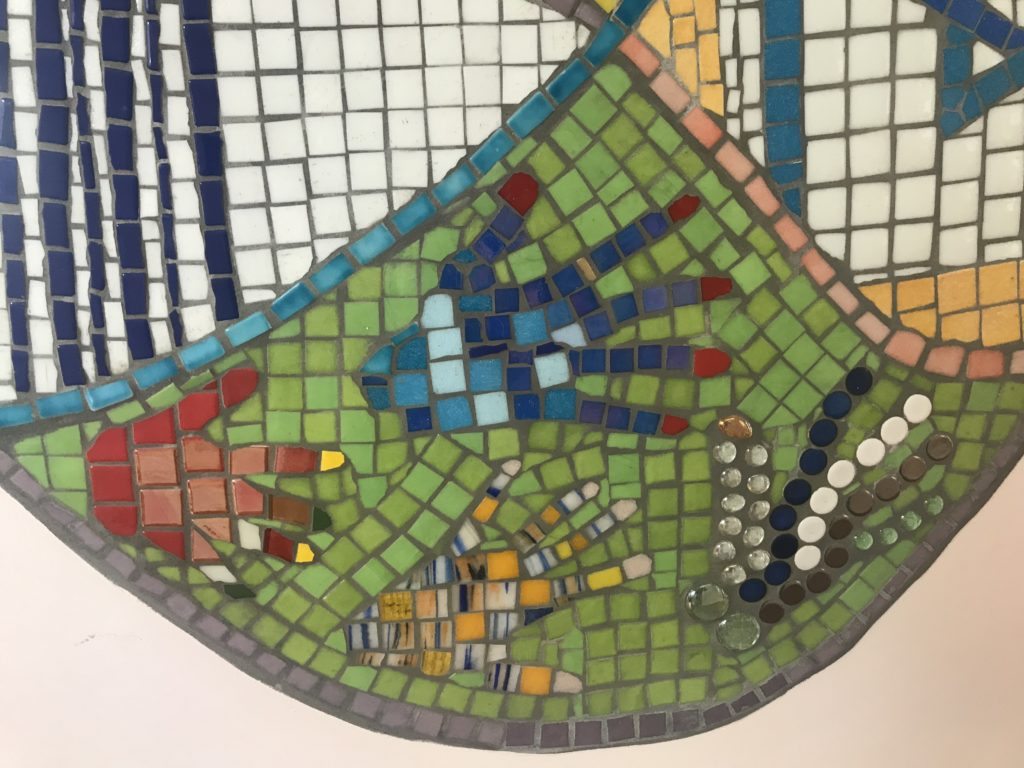 She also explained how it was decided to incorporate the dates of the Hebrew and Secular year into the design: 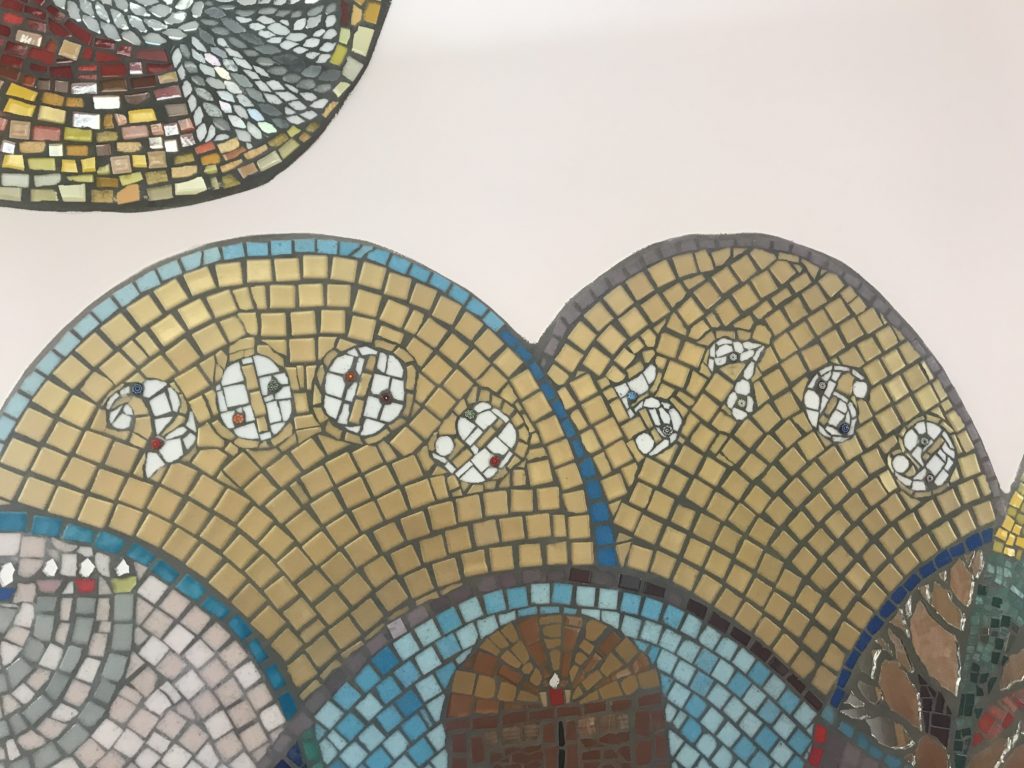 The project ran from February to May 2009, involving over 120 members of the community – of all ages – who created the artwork in a series of workshops over the this time.  The mosaic was formally unveiled by the then Mayor of Elmbridge.

Sandra explained why the mosaic is such an important part of Kingston Liberal Synagogue: “It’s made from hundreds of different pieces, each one different with its own characteristics – but when they’re put together it creates something really beautiful – just like our community”. 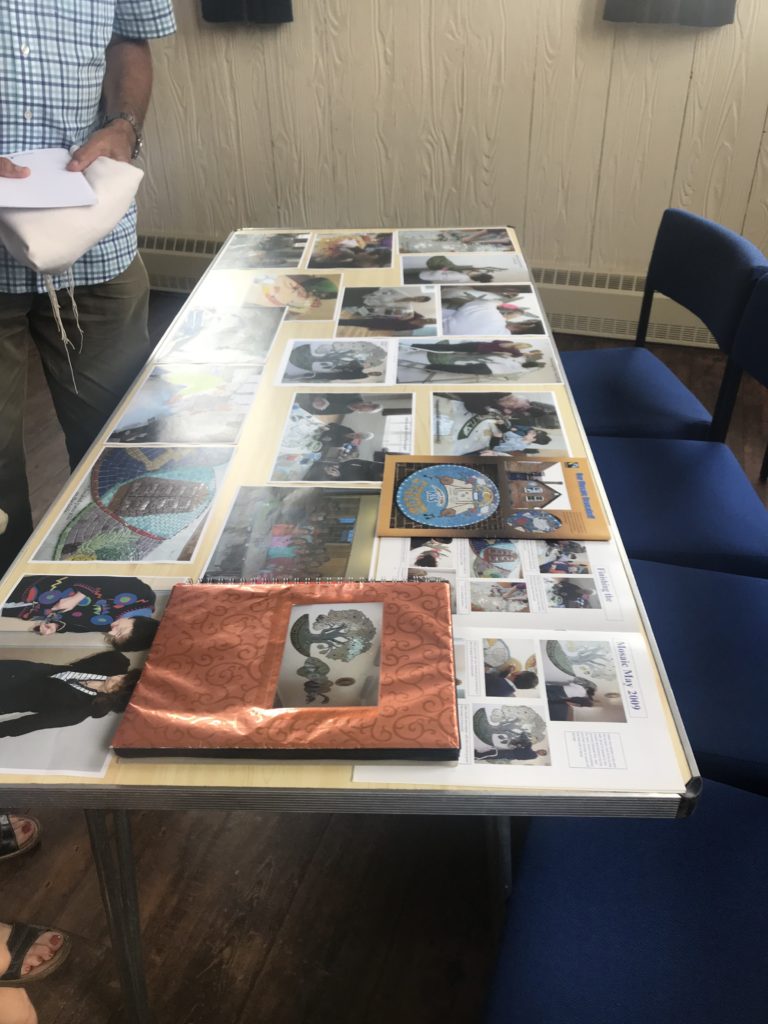 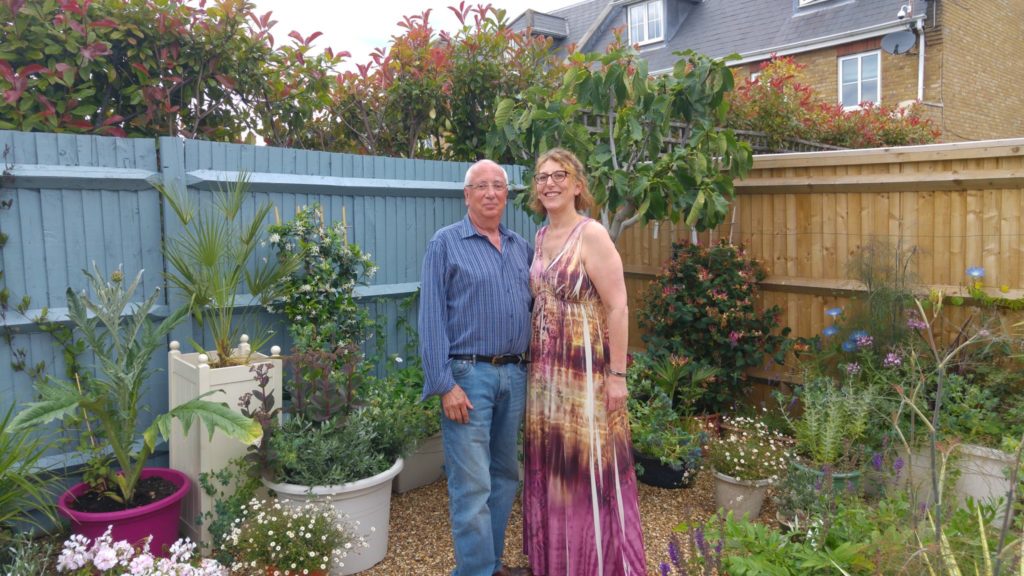 Robert Markless and Carolynne Farrer, Head of our Beiteinu school, in our garden

On Saturday 6th July we hosted a special Shabbat service in honour of long-standing teacher, Robert Markless, who is leaving the area after 25 years of teaching having prepared 135 pupils for their Bar and Bat Mitzvahs, and becoming known as “Professor of Bnei Mitzvah”  Many of his former pupils attended the service at which he movingly read from Bob Dylan’s poem “Forever Young”.

Former pupils who attended Saturday’s service were unanimous in their agreement that he made possible the daunting prospect of reading from the Torah.  “He was the most patient and supportive teacher I’ve ever had” said Sam Alston.  “He really built up my confidence when he told me that I soaked up information like a sponge!” said Nicola Jessop.

As well as teaching at KLS for 25 years, Robert was also awarded a Mayor’s Community Award last year for his extensive and wide-ranging contributions to the voluntary sector across Kingston Borough as well as serving as a Trustee for various organisations such as Kingston Race Equalities Council, Kingston Voluntary Action and as Governor for Kingston Hospital. More recently he has been volunteering for the charity Pets as Therapy, taking his dog Daisy to visit patients twice a week.

Robert is moving to Huddersfield to be closer to his daughters.  However he plans to return to KLS this Autumn for the High Holy Days to organise the Torah reading at the Yom Kippur afternoon service. Our tradition now dictates that this is shared by the year’s Bnei Mitzvah, in fulfillment of Robert’s quip “Torah is for life and not just for Bar/Bat Mitzvah”.

We wish him well in his retirement and look forward to seeing him here again very soon!

On Shabbat of 29/30 June we held two special services celebrating our different generations.

On Friday 29th June we held a celebratory Shabbat service for one of our founder members, Brenda Dombey. Brenda was not only instrumental in establishing our community back in 1967 but she also served as Subscriptions and Donations Secretary for over 25 years.  The choir sang some traditional melodies in her honour.

Brenda and family in our Kehillah Garden after the service

It was a beautiful Summer evening and we were able to hold Kiddush in our Kehillah Garden. 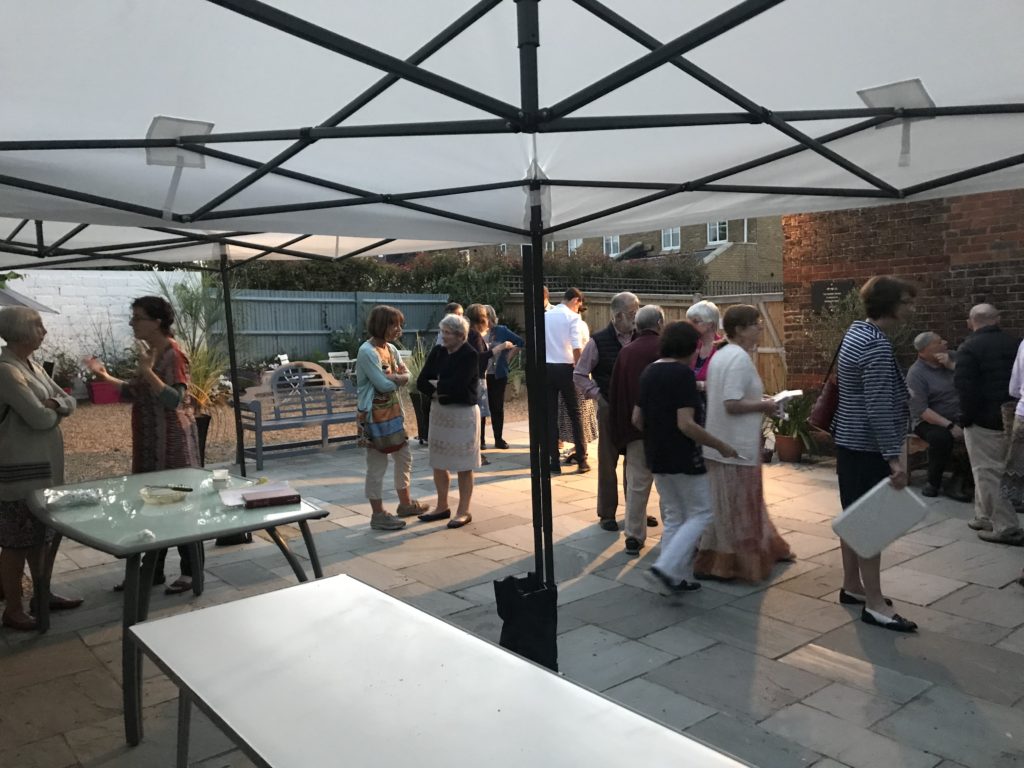 After celebrating one of our founder members, on Saturday morning we celebrated the entry into Jewish adulthood of one of our younger members, Marcus Limbuwala, as he became Bar Mitzvah.  Marcus spoke with confidence and wit about his Torah portion, Parashat Korach, referring to Moses’s ‘Face Palm’ when challenged by Korach! 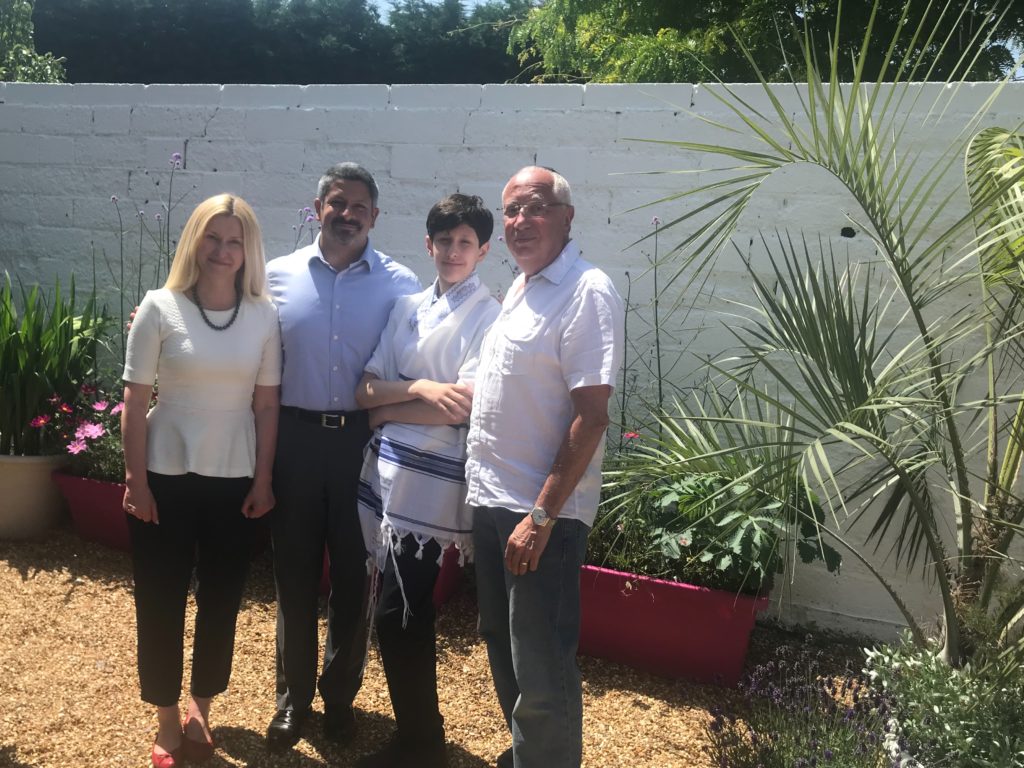 Marcus with his parents and his Bar Mitzvah teacher, Robert Markless

Another beautiful Summer’s Day meant we were able to have Kiddush outside once again.  Marcus helped Rabbi Rene with the challah…. 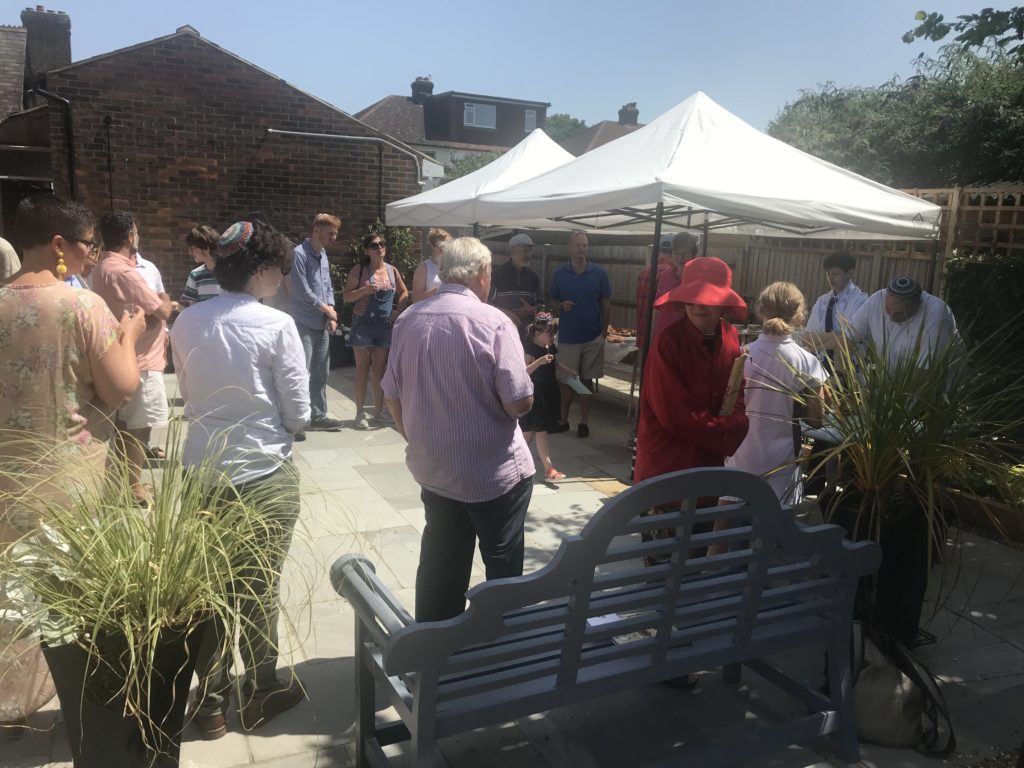 Rabbi Rene and Marcus (right) prepare the Challah at Kiddush

….. and then announced he was going to eat his body weight in bagels: 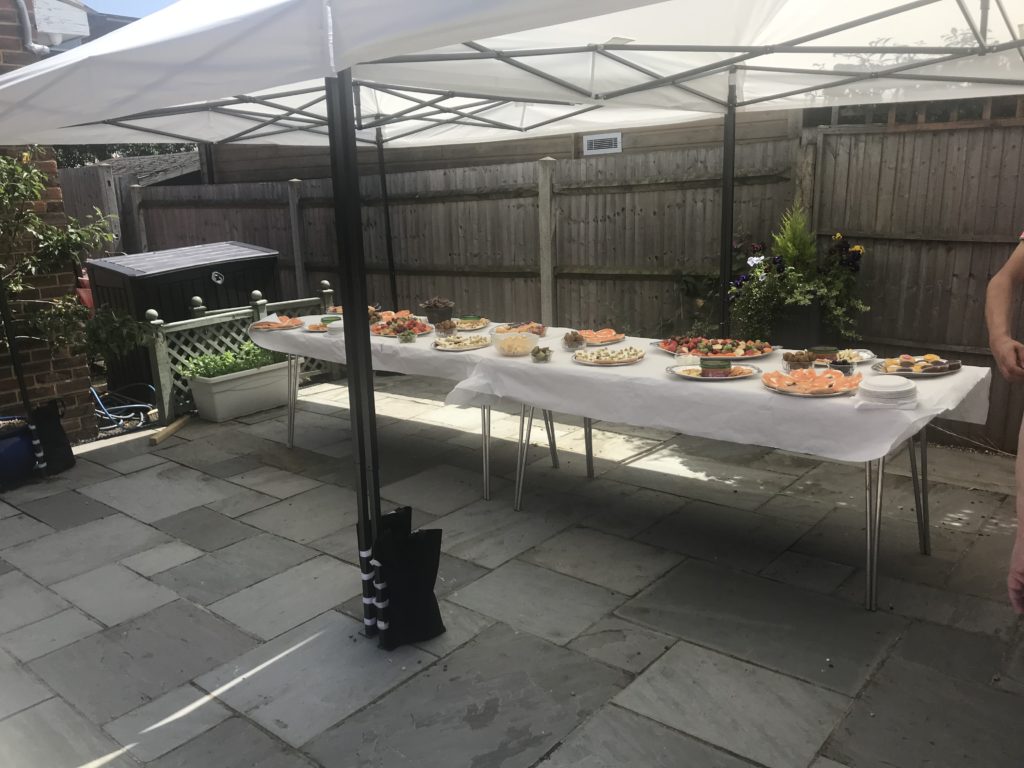 Members of KLS enjoyed a weekend of music and celebrations at events hosted by Liberal Judaism. 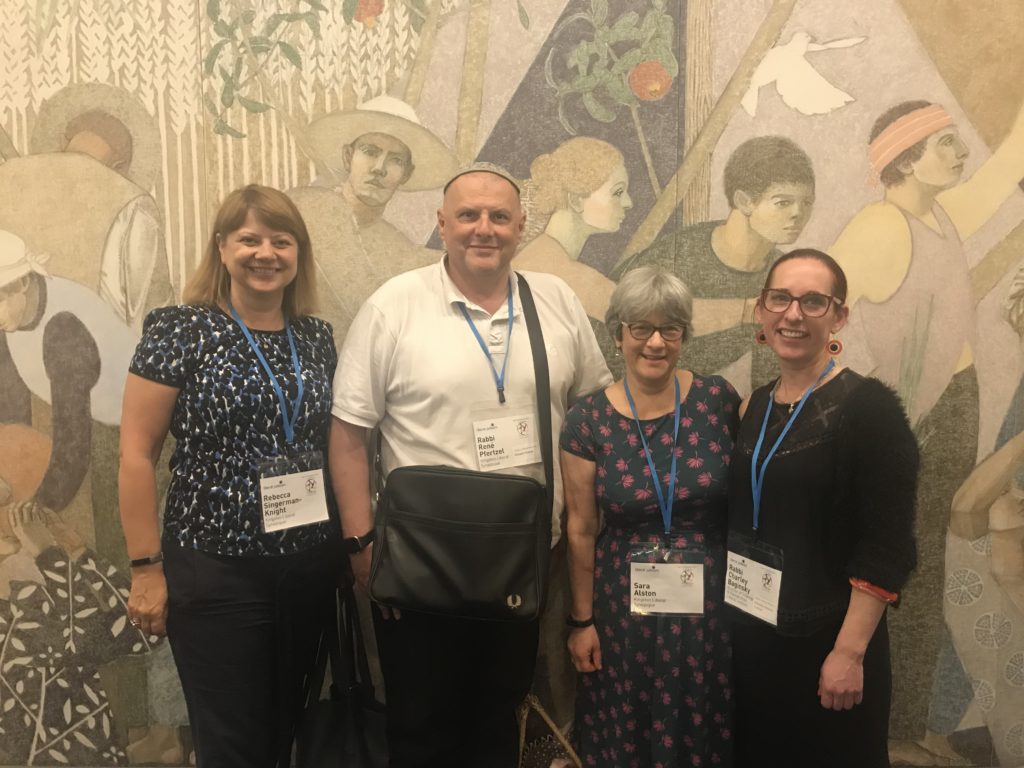 On Saturday 22 June, they attended the Day of Music at Northwood and Pinner Liberal Synagogue.  Among the many musical sessions was one hosted by KLS’s own Musical Director, Rebekka Weddell, who led a choral group singing her own composition ‘Kol Korei’ (A Voice is Calling). The day concluded with an informal concert of music-making.

Liberal Judaism’s Day of Celebration was held the following day.  The theme of the day was “If  I am  only for myself” and there was a wide choice of sessions with themes such as volunteering, safeguarding and inclusion as well as keynote speakers Dame Margaret Hodge and Jean Gaffin OBE.

Overall it was a highly enjoyable, uplifting and thought provoking weekend!

On Saturday 15th June, we invited members of Kingston Refugee Action together with Syrian refugees to talk about their experiences of settling in England.

Journalist and Arabic Teacher Hasnaa Omar left Syria in 2013 and arrived in London in 2016. She was subsequently able to bring her husband, an IT Manager, to England and they now have a son, George, who is 18 months’ old.  Describing her experiences of settling into the UK, Hasnaa explained how undertaking voluntary work on arrival is a good way for refugees to learn English and improve their employment prospects.

Marwa Belghazi, the Resettlement Coordinator for Kingston Refugee Action, spoke about her role in helping refugees settle into the Borough – by providing practical and cultural support. Currently eleven families have been settled in Kingston with a few more due to arrive shortly.

We have a proud history of working with refugees; many of our community are very active in befriending new arrivals and others have helped in providing furniture and other useful items to new families.

Speaking after the service Marwa said “It was so heartwarming to be invited into a Synagogue, and one which is so open to people of different cultures, and to see that the community is so welcoming. I look forward to working further with members of KLS in helping newly arrived families to settle into the area.” 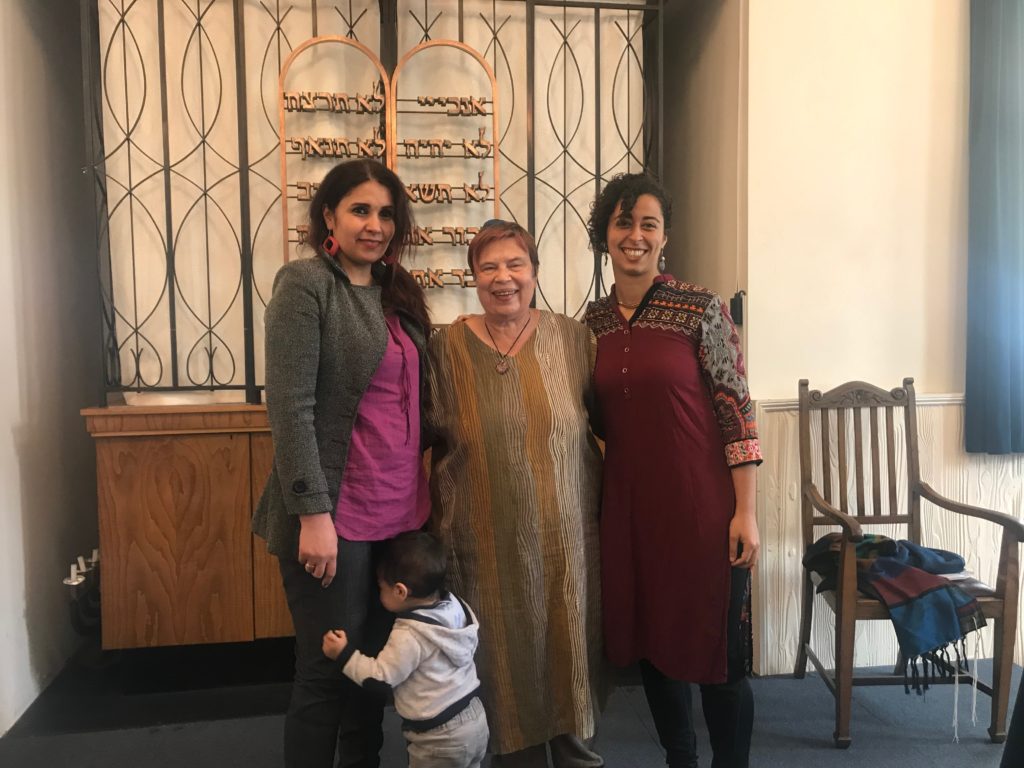 The first fruits of the harvest from our Kehillah Garden were picked at our Erev Shavuot service on Saturday 8th June – modest beginnings but the sign of things to come! 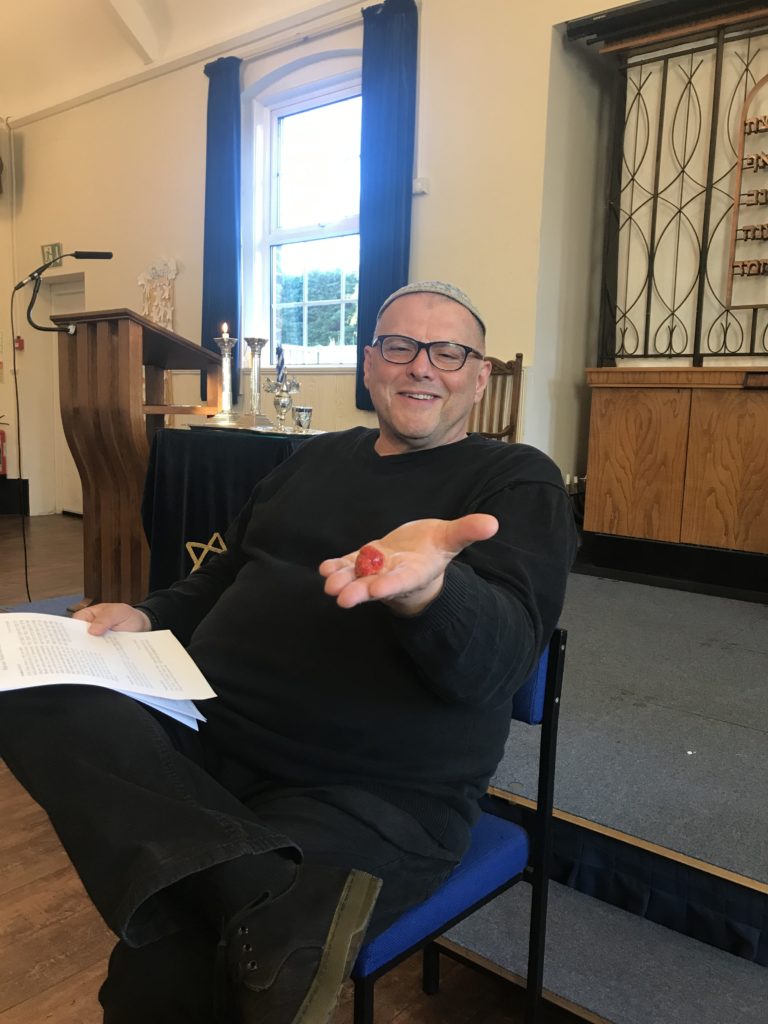 The cheesecake-fest started on Shabbat morning; our Beiteinu children made these beautiful lotus biscuit and orange cheesecakes for our Kiddush: 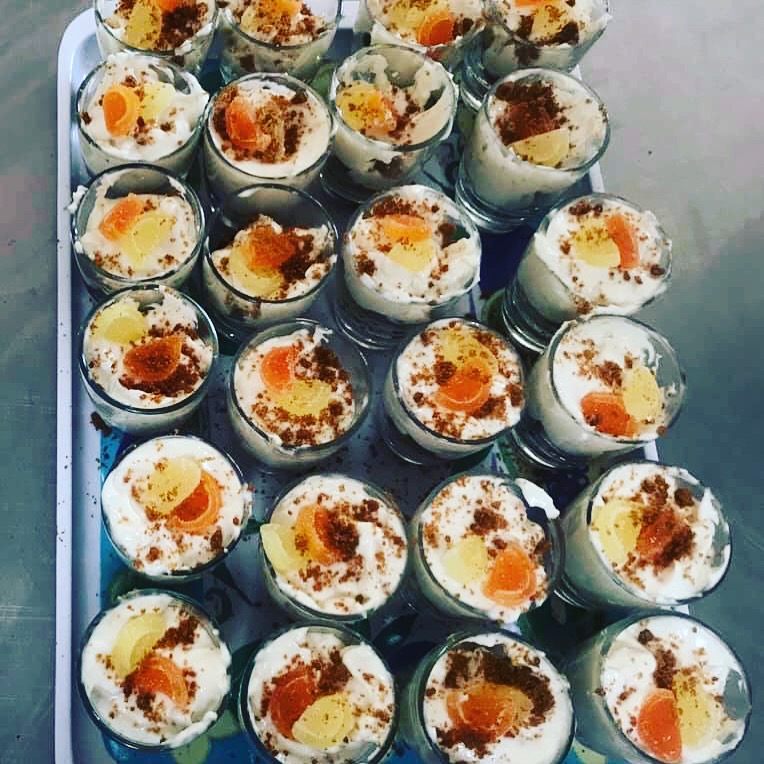 Later that evening, after our service and study sessions, we dug into the cheesecakes created for our annual competition: 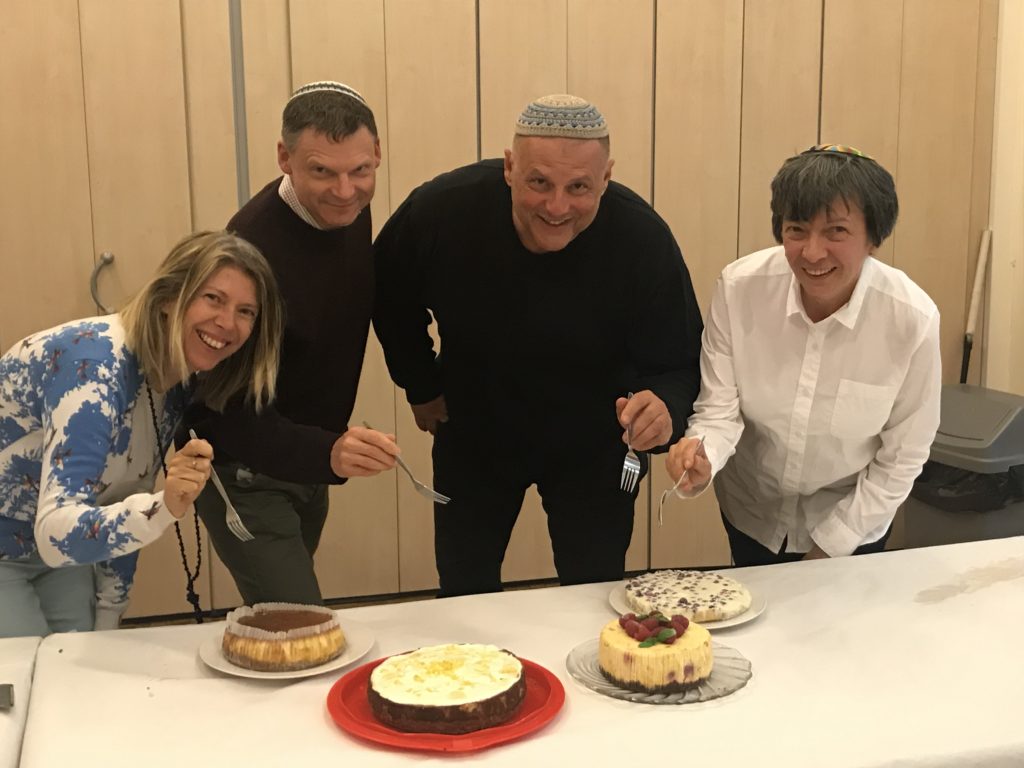 All were superb but the prize went to our member Liz for her delicious traditional baked cheesecake – Mazel tov Liz! 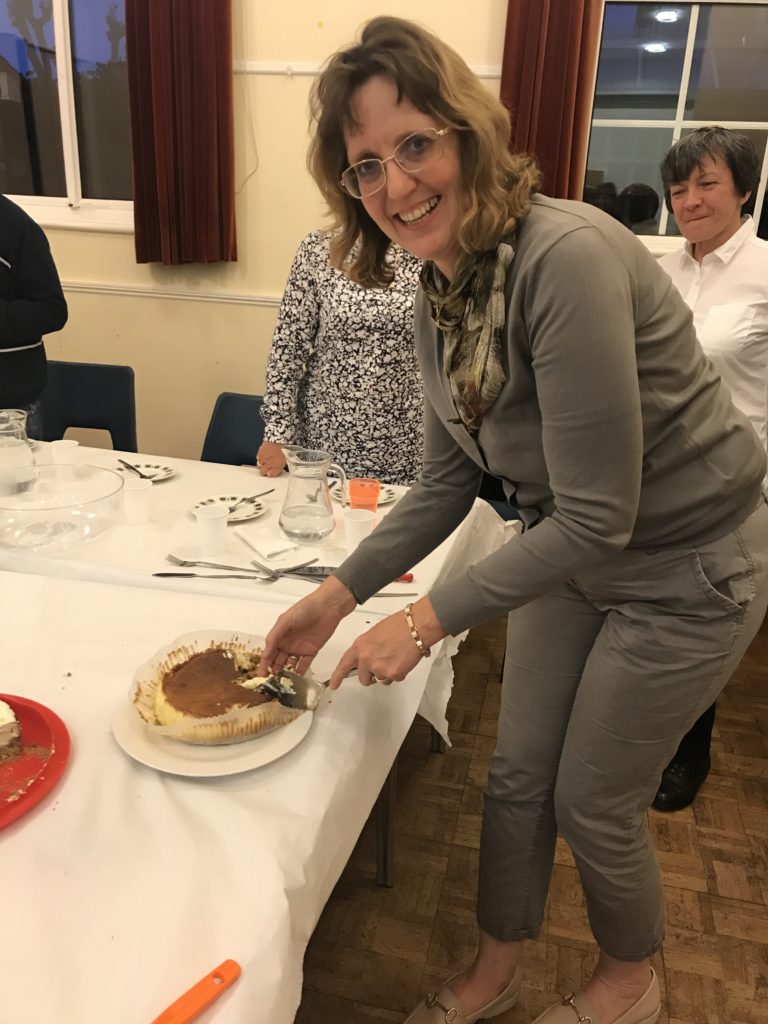 On Sunday 2nd June, we gathered together to formally open our new “Kehillah” (community) garden, which has been named after a much loved member.

Annemarie Seelig was a refugee from Nazi Germany who arrived in the UK aged 17.  She spent much of her adult life helping to educate local school students by speaking to them about her experiences as part of the annual Holocaust Memorial Day projects.

The legacy she left KLS has enabled us to create the garden which was previously a little used concreted outdoor space.  After being landscaped last Summer, a group of our members has spent the last few months creating raised beds and container displays with many further plans in store.

KLS member Fleur Standring, a good friend of Annemarie, gave a moving talk at the opening ceremony, speaking of her mischievous nature, her joie de vivre and her determination not to let her experiences as a child define the rest of her life.  “She loved gardens and plants which makes this garden such a beautiful way to honor her memory” said Fleur.

The community has already held Kiddush in the garden and is planning many more events – social and religious – over the coming months.

Members of the local Muslim community chose to break their fast with us on the evening of Monday 13th May, and invited its members to join them in their ‘Iftar’ – the evening meal which is held after Sunset.

We already have close relationships with members of the South London Dialogue society – an organisation established by British Muslims with the aim of advancing social cohesion by building community relationships – they attended our Interfaith Chanukah event last December.

Rabbi Rene Pfertzel said “It was a real honour and pleasure to welcome our Muslim friends from the South London Dialogue society to our Synagogue, and to host them as they are breaking the daily fast of Ramadan – which is such a significant aspect of their faith”.

He went on to say “We come from very different background. Our religions are, at least in form and shape, quite different. And yet, we are able to sit together, to share a meal, to listen to each other. If we, Muslims and Jews alike, are able to do it, it means that it is possible and that is a really positive message”.

Usame Yakutcan, from the South London Dialogue Society, said “It was my first time in a Synagogue. It was a great experience for me to meet others from a different religion and to share food with them and get to know each other.  I hope to come again”.

We welcomed one hundred members and guests to our communal Seder meal on the evening of Saturday 20th April to celebrate Pesach. Visitors congregated in the new garden before commencing the meal inside.

During the evening it was announced that the new garden would be named “The Kehillah Garden” – meaning community in Hebrew.  It will also be dedicated to the memory of a deceased member, Annemarie Seelig, whose legacy allowed for the garden to be developed.   The name was chosen after a community competition and vote.

We are really looking forward to welcoming author Tamar Hodes, author of The Water and the Wine to our Synagogue on May 15th.

Set on the Greek island of Hydra in the sixties, the book is a fictionalised account, based on research, of the lives of the artists and writers who lived there. The main focus is on Leonard Cohen – his poetry, his music, his love for Marianne and his Judaism. Tamar and her family also lived on Hydra at that time.

Tamar will be happy to sign copies of her book.

To book please click here – a £5 donation on the door will be requested.